1. Before you start any difficult conversation, here’s the question you must ask yourself if you are determined to be better at handling challenging discussions (rather than avoiding them or messing them up)…

How good are you at handling difficult conversations with customers, team members or even family members?

Where is the value in this question?

…your willingness and ability to handle difficult conversations can positively help you and your business.

Handle difficult conversations badly and the situation can get worse.

Handle difficult conversations well and you’ll achieve a positive outcome for you, your business and the other person involved.

​The checklist you find below helps show you how to turn a difficult conversation into a constructive conversation.

Warning: If you assume you are right; allow ‘blame’ to show up in your language; avoid taking some responsibility for the issue; ignore the feelings involved; miss the opportunity to learn more about the situation, issue or difficulty then your difficult conversations will always be difficult.

2. The ‘Difficult Conversation’ question checklist – Your difficult conversations become easier to manage when you know what questions to ask so that your conversation becomes genuinely constructive.

The goal of the conversation is to find a ‘third way’. This only becomes possible when both of you have a better understanding of each other’s experience of what happened, each other’s feelings and each other’s motivations too.

Here are six questions and three subjects to help you construct a better conversation.

Your questions will start with one of six words:

Because difficult conversations tend to be emotionally charged it pays to understand that there’s a different emotional intensity to each of these six questions.

If you ever want to keep a conversation going but reduce the emotional charge ask one of the three lower-charged questions – Where; What; When.

Questions about what exactly?

Now you need to work out which questions will best help the conversation start and flow.

a. Ask about what happened

b. Ask about the feelings involved

c. Ask about the motivations involved

If at any time you ask a question that suggests blame then you’ll ignite resistance and emotion and be less likely to reach a positive outcome for all. For example you know this question will ignite the heat in a discussion:

“Who, in their right mind, would do that?”

“How on earth did you reach that conclusion?”

These three questions strongly imply blame. But all three questions can be asked in a different way and be less inflammatory and stay in a ‘learning conversation’. And even accept some responsibility for the action and outcome too.

“Tell me what information prompted you to do it that way?”

“What have I done or said to suggest this way of doing things?”

“Tell me your thinking on this would you, and the conclusions you reached?”

IMPORTANT: Because there are two versions, two views, two perspectives on what has happened you also need to share the way you see things. But only after you’ve got the conversation flowing with a learning perspective by asking about their version and view. You may even introduce the following two elements before you share your view.

b. Ask about the feelings involved – In difficult conversations feelings typically run high.

Ignore your feelings and ignore their feelings and all they’ll be thinking about as you talk and they talk is the way they feel. As a result they won’t be listening deeply and neither will you. Neither of you will learn anything well enough for a positive outcome to happen.

Difficult conversations rarely get fully resolved unless the feelings have been acknowledged, recognised and discussed.

So ask questions that acknowledge, recognise and prompt a discussion about feelings. Questions like:

“It looks like you’re quite emotional about this, tell me how is this making you feel?”

“This can be really frustrating, how do you feel about it?”

“How are you feeling and how do you think I feel about what’s happened?

Remember. Your feelings need to show up in the conversation too. The 3rd question above is one way of introducing a conversation about the way you feel, but with a learning perspective.

c. Ask about the motivations involved – The Harvard study and the book ‘Difficult Conversations: How to discuss what matters most’ talks about the need for an identity conversation to show up. This means a conversation that recognises the deeper motivations about what’s happened or is happening.

Conversations are difficult because people are resisting. If they weren’t resisting there wouldn’t be difficult conversations. People resist because their identity is threatened or downgraded or undermined.

Ask questions around these motivators to discover what’s missing or what’s happened at a deep personal level. Share your thoughts and feelings about the impact on your ‘identity’ around these six motivations. And be aware that your priorities in this list may well be the polar opposite or different from the other person. You may see status as trivial, they may see it as jugular. You may see appreciation for what you do as a big deal for you, they may see it as unnecessary.

· Autonomy – we all have an internal voice/opinion and a deep desire to be in control of how we think and feel. When self reliance has been attacked or downgraded then you’re in for a difficult conversation.

· Appreciation – ignoring a person’s contribution to a project or situation or result can create a difficult conversation. Research into why people leave jobs typically has this as the number 1 reason.

· Role – your view of your role and their view of their role can be a source of conflict without you realising it.

· Fairness – One of the largest surveys of employees ever, by the Sirota Group (of 2.8million people), strongly suggests that without a sense of fairness you’ll never be able to build a motivated team. It follows that if people’s sense of fairness has been downgraded then difficulty will follow.

NB Check out the video recommendation to follow for more background on this aspect of difficult conversations.

3. Identity/Motivator Exercise – How do you get a group of people to experience the six underlying motivators of difficult conversations?

Exercise:- see the exercise used in this video for background preparation – go to minute 15 of the video if you want to jump straight to the exercise https://www.youtube.com/watch?v=QECio8h7olQ

When working with a group on the subject of difficult conversations you want them to experience the insights and emotions involved in this important topic. Here’s how you make this happen. Here are the instructions for your group:

· Sit on a row of 3 chairs close to each other

· Imagine you’re on an aeroplane 3 chairs facing forward (“who now feels hard done to because they’re in the middle?!!!”)

· Your right hand seat is window seat, left is the aisle seat

· What happens? What’s the visceral reaction you have? Tell me what do you in the aisle seat think and feel?

“Now use the ‘identiity’ checklist and describe between you what’s happened to each motivator and how people feel (focusing on the window seat person). Which of these is getting stepped on?”

Put the list of 6 motivators on a slide to help your groups of three describe the impact of each one. Here’s the sort of response to expect and engage in…

Autonomy? Back off. Don’t invade my personal space.

Affiliation? I’ve been ignored. Shouldn’t we at least be in this together?

Appreciation? No appreciation of my status or role as the window blind controller!

Role? Hang on a minute I’m the window seat person I handle the blind (I’m in charge of window shade)

Status? If window seat is not even consulted/asked, status goes down. The middle seat person is always lower status than window seat before anything happens!!! The window seat is up there!!! How come you don’t acknowledge my superior ranking in window seat?!

Share the fact these are not decisions people make – they are intrinsic, automatic, emotional responses to core identity motivators/demotivators.

Now pick a relationship that you have some friction in it (peer, boss, teenager, partner, supplier). Run down the diagnostic checklist and see which one you think is getting stamped on and decide what you can do to improve things.

4. Listening with intent – Beware! Listening is a skill so often taken for granted

It’s the exception to find anyone, other than some sales people, to have been taught a vitally important life skill called active listening. And even when active listening is discussed the core skills of this are often vague and unclear.

There are 4 levels of listening:

c. Things get better when you hear the words being said. At least you can say them back when your spouse challenges you about not listening to him! But listening to words aren’t enough if you want to handle a difficult conversation well and resolve the challenge

e. And the quality of the conversation goes up when you not only commentate on key phrases but also on the tone and feeling being expressed. This is called empathic listening.

It’s not enough to listen. You need to demonstrate you are listening by repeating or rephrasing key phrases and also reflecting the feelings being expressed.

1. Repeat the words being said

2. Rephrase the words being said

3. Reflect feelings and the words being said

4. Reflect feeling and rephrase the words being said

5. The book and other powerful resources:

‘Difficult Conversations - How to discuss what matters most’

If the insights from a book can improve the conversation between a teenager and a parent, a customer and a supplier, and between colleagues it must be worth taking seriously.

This book does just that and can improve your knowledge, insight and skills about making difficult conversations easier to manage and more likely have a positive outcome for everyone involved.

We strongly urge you to read this book from cover to cover and start applying the insights to your conversations. You can get the book here -

Other resources worthy of your attention:

Go to https://www.youtube.com/watch?v=QECio8h7olQ and watch Sheila Heen, one of the authors of the book, talk about resistance. Resistance in you and resistance in others is the source of your difficult conversations.

Sheila describes the 6 core emotional motivational triggers at the centre of people’s resistance and how you can use the six triggers as levers for more positive, helpful, constructive conversation. You’ll also see Sheila use the exercise described above on a large audience should you want to use the exercise with your people.

Take a look at the following images…

But what if you have two different sets of information, experience, feelings and motivations?

How many different perspectives can be attributed then?

In difficult conversations it’s our job to help both sides to see eachother’s viewpoint, help both sides learn, without a hint of blame and a healthy dose of responsibility

Treat your difficult conversations as learning conversations to discover both viewpoints and then to find a third way to agree on. 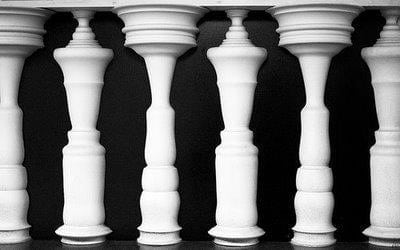 Multiple truths - what do you see? White wooden finials or columns or 5 people? 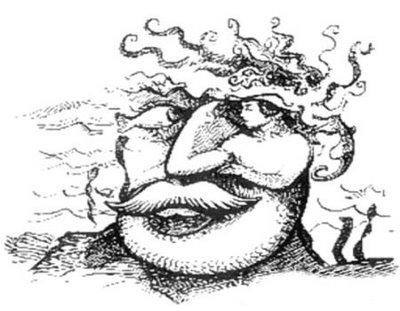 Multiple truths - what do you see? Moustachioed man or mermaid? 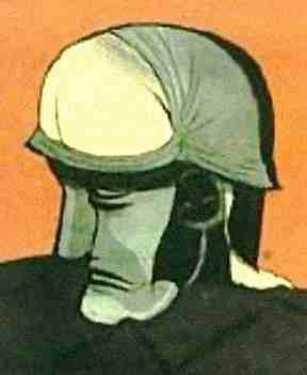 What’s the man doing? Snoozing or bending over? 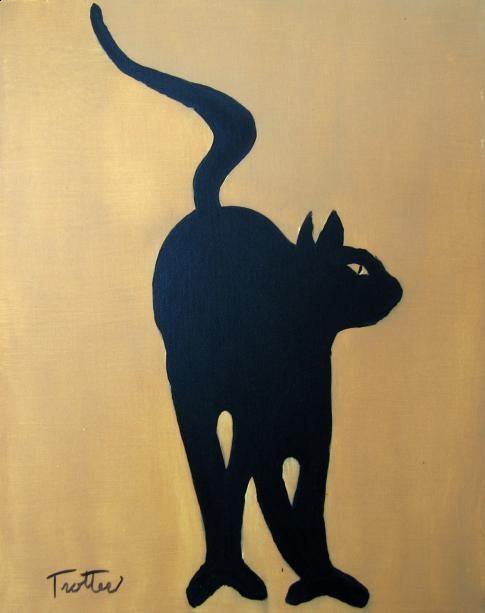 Is the cat facing towards you or away from you?

Facing the sun or freezing? Native American or Inuit? Does this picture make you feel hot or cold?